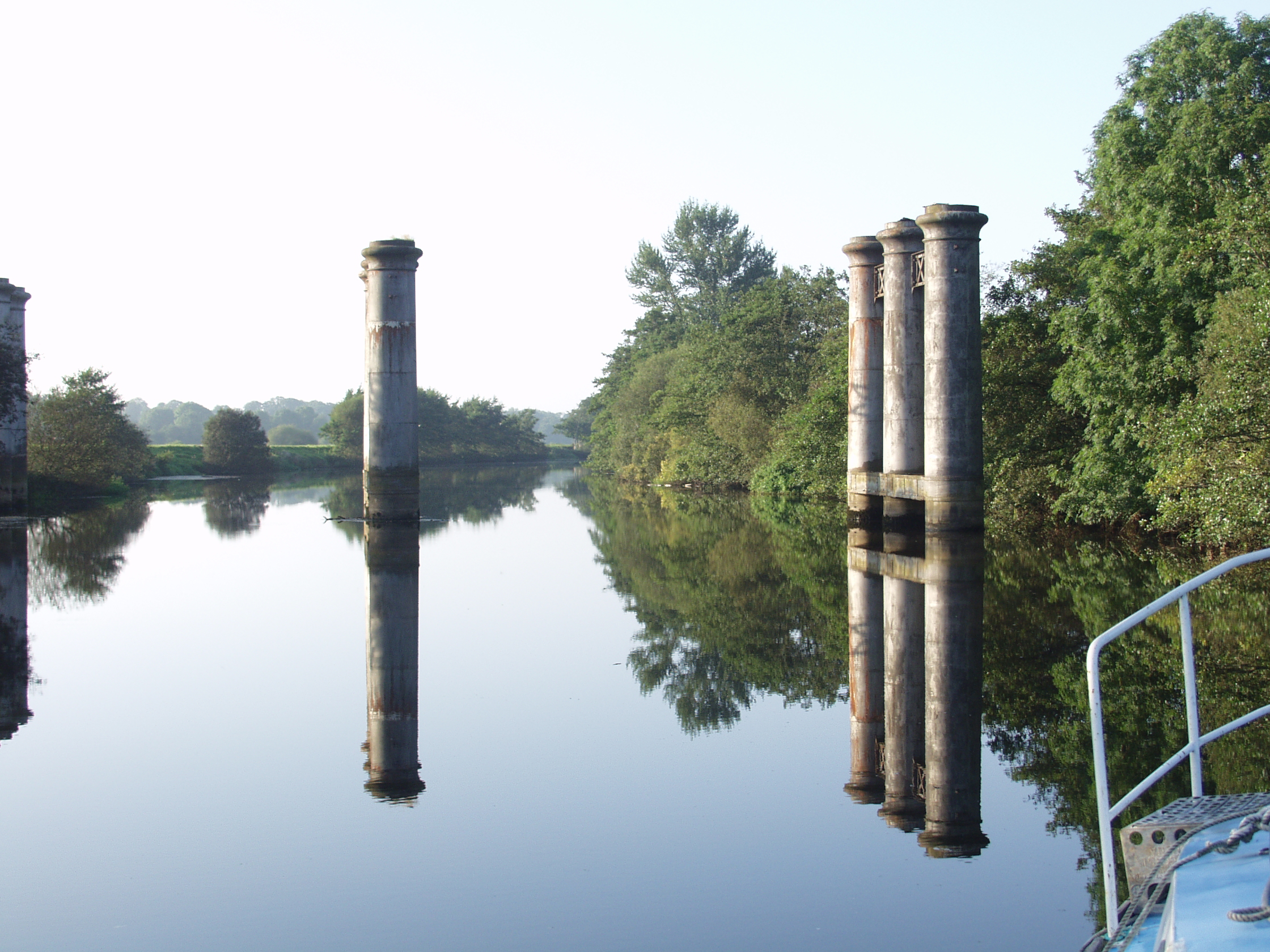 Great Northern Railway Bridge
The remains of the original bridge piers of the GreatNorthern Railway Bridge  which crossed the Blackwater en route to Dungannon from Portadown are one mile south of Verner’s bridge. This bridge was built in the early eighteenth century and the remaining piers are still in remarkable condition. The navigation channel is marked by heavy iron fendering.

The  River Bann and Lough Neagh Association (RBLNA) can trace its roots back to 1962 in the River Bann Boat Club (RBBC); it came into existence officially in 1967 because of the threat of closure of the River Bann navigation between Toomebridge and Coleraine. A chance  encounter between  Desmond Downing and Lord O'Neill and the discussion about the closure prompted a public meeting in Coleraine Town Hall. After the public meeting and a call to action RBLNA was formed incorporating RBBC and all interested parties.  A campaign committee was elected and under Lord O'Neill's guidance, it started to negotiate with the Government departments involved. The navigation stayed open, I think influenced by us. The fact that navigation is still possible is due to the efforts of many people, but without the work of the RBLNA it is quite likely that navigation would have ceased years ago. Now the Association has become a branch of the Inland Waterways Association of Ireland.

RBLNA's aims are to preserve and promote the amenities of the Bann and Lough Neagh, their tributaries and associated waterways. The Association held many boat rallies over the years, mainly on Lough Neagh but also on the Lower Bann. We have campaigned tirelessly for the good of the waterways have produced a pilot book for the entire navigable system. We have transformed Rams Island into a paradise for wildlife and visitors alike and are still working strenuously for the betterment of our waterways for all to enjoy.

The RBLNA could really be described best as being a pressure group. Being independent, we can exert influence where we feel it will do most good. We do this by talking, writing to Government Departments, MLA's, MPs or whichever Secretary of State is in office, and we usually achieve our objectives, even if it takes time. Our stated aims and objects are ''To preserve and promote the amenities of Lough Neagh and their tributaries.'' The word ‘amenities’ is important. Mervyn Henry suggested it and the planners use it a lot, as it can mean exactly what you want it to mean. Anything we think is good for the River Bann and Lough Neagh, whether development or conservation, we support.

There has been a substantial increase in the Government's interest in the whole of the Lough Neagh Basin. . As Waterways Ireland becomes more established and interest grows in the possibility of reopening the Ulster Canal, the RBLNA is keen to play its part in the exciting changes that are under way.

Thanks to the late Eric Seaton and Victor Hamill for their words of wisdom. Michael Savage.

T he Lower Bann ends its 37 mile  journey from Lough Neagh to the sea at the Barmouth between Castlerock and Portstewart Strand.